Young Oceans is a meditative art rock band from Brooklyn, NY. The project originated with a collective of artists affiliated with Trinity Grace Church in NYC recording songs by songwriter Eric Marshall, pursuing a musical companion more for reflective prayer than congregational experience. The resulting self-titled debut album was named Top 10 album of the year for 2012 by RELEVANT Magazine, and spawned the complementing instrumental release BEFORE THE BEGINNING.

The band’s second release ADVENT, first as an EP in December 2012 and ultimately as an expanded deluxe edition in March 2013, explores more conceptual turf. Though by a tradition a de facto holiday release, the subject matter focuses squarely on the yearning but hopeful desperation inherent in both the first and second coming of Christ. 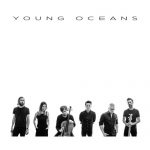 The band’s fourth release and second full-length studio album, I MUST FIND YOU, followed in September 2014, and pushes even further left of center where “densely layered atmospherics of the Brian Eno and Daniel Lanois variety lend equal appeal to the devoted believer, meditative transcendentalist, and discerning artrock fan” (Noisetrade). As with previous releases, the companion instrumental album STEADY THE STARS followed in 2015.

VOICES, Vol. I arrived in April 2016, presenting an interim collection that re-visits some of the more congregational minded songs of the Young Oceans catalog. A response to “consistent requests we have received over the years for help in adapting the songs for use in the local church”, VOICES features a number of notable outside vocalists (Harvest, Leeland, Evan Wickham, Ellie Holcomb, All Sons & Daughters, Sarah Macintosh, and Mike Donehey of Tenth Avenue North) and a backing choir throughout. Produced by Jonny Macintosh (Third Day, TheSoundKids, Harvest), the album reveals the humble, corporate soul of each song under a wave of human voices, and offers a lovely stopgap before the much anticipated followup to I MUST FIND YOU.